Modest J. Mero - Minister Plenipotentiary at the Permanent Mission of the United Republic of Tanzania to the United Nations 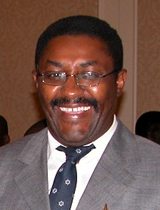 Modest J. Mero is currently a Minister Plenipotentiary at the Permanent Mission of the United Republic of Tanzania to the United Nations (UN) in New York, an Expert in the UN Second Committee covering economic and financial matters, and a Member of the UN Committee on Population Award. Prior to his current posting, Mr. Mero served as the Head of Policy Coordination in the Department of Policy and Planning at the Ministry of Foreign Affairs and International Cooperation, and as an Advisor to the Committee on Economics and Finance of the United Nations General Assembly. He worked for the United Nations Conference on Trade and Development (UNCTAD) as a consultant in developing Trade Information Systems (TRAINS) Database; Advisor to the Southern African Development Community (SADC) Secretariat on Negotiation on SADC–European Union Economic Partnership Agreement (EPA) and in the area of Regional Industry and Trade Policies, Program Development and Implementation.

Mr. Mero has vast experience regionally and at the international level in training, research, consultancy and scholarly work in the area of international trade modeling, finance and investment. As a Trade and Investment Consultant, he has conducted several consultancy projects in areas of Analysis and Modeling of International Trade, Information and Communication Technology, Strategic Management, Project Appraisal, Corporate Finance, Risk Management and Economic Diplomacy.

Mr. Mero holds a BS (Honors) in Statistics and Science from the University of Dar Es Salaam (Tanzania); an MS in Finance and Investment from the Strathclyde Business School (UK); a Post Graduate Diploma in Information Technology from the Institute of Information Technology, New Delhi, India; and a Diploma in International Trade Negotiation under the World Trade Organization (WTO). He has also received intensive training on technology development at the International University of Japan, Management of Small and Medium Enterprise, at Vrije Universiteit, Brussels, Belgium.

Brian J. Nickerson is a tenured Professor and Chair of the Department of Public Administration at Pace University. He also currently serves as the acting Executive Director of the Wilson Center for Social Entrepreneurship. He formerly directed (2001-2007) the University's Edwin G. Michaelian Institute for Public Policy & Management within the University's Dyson College of Arts & Sciences.

Professor Nickerson has been teaching at the collegiate level since 1993. He has earned not only his Ph.D. Political Science, but also a Law Degree, and a Masters degree of Public Administration. Today, he teaches an array of graduate-level courses in public policy, organizational management, and social entrepreneurship within Pace University's Masters of Public Administration Program.

Archana Shah was born in Kenya and raised in Hong Kong, the United Kingdom, and Tanzania. Ms. Shah is an executive director at Morgan Stanley, where she is building the firm's emerging markets derivatives business in North America, running the client facing arm. Her primary role involves working with investors to find opportunities and optimal solutions in the emerging equity markets using a variety of financial products in the derivatives space.

Ms. Shah holds a BA in Finance and French from the University of Pennsylvania and an MA in Economics from New York University. She is an avid cook and traveler, as well as a black belt in karate.